The SS, Snowflakes, and Supervision

Like a Marine in a properly executed MCMAP training session, the Marine Corps is taking its lumps in the image department lately. In April of last year, Lance Corporal Harry Lew committed suicide in Afghanistan after experiencing sustained hazing on the part of his squadmates. Although there is no way to tell if the hazing caused LCpl Lew’s suicide, it almost certainly contributed to it. The story remains in the news as the Marines involved go through the court martial process. In January, the story broke that Marines, including Staff NCOs, had filmed themselves urinating on corpses of Taliban fighters. I’m not going to comment specifically on these two issues as the failure in ethics is pretty obvious. Anytime a Marine is ostracized in his unit, for whatever reason, the leadership has failed. The desecration of human corpses, whether filmed or not, is indefensible.

I will, however, comment more specifically about the use of the SS logo on flags since there seems to be some debate over whether or not it was appropriate. I’ll ignore the fact that scout snipers apparently think that they are special snowflakes entitled to their own flag above and beyond the traditional scarlet and gold Marine Corps flag that every other unit uses. The first excuse posited by those who want to brush this most recent PR nightmare under the rug is that the scout snipers were ignorant of what the symbol meant. I guess that’s possible. What’s not possible is that every SNCO and Officer in charge of every scout sniper unit that used the flag shared that ignorance. No way. They just refused to do anything about it.

The second, and far less believable excuse is that the SS logo is disconnected from the Nazi ideology and simply a reflection of Marines’respect for German military prowess. Nothing could be further from the truth. The SS were not a military unit. They were a paramilitary unit formed to protect Nazi party meetings from interference, chosen for their loyalty to the Nazi party. A subset of the SS, the Waffen-SS, was tasked with combat operations against Nazi Germany’s enemies, but this does not change the fact that the overall purpose of the SS was the execution of Nazi ideological aims. Even if we were to look to Nazi Germany for inspiration for military prowess, it was the Wehrmacht that achieved blinding military success, not the SS. The next excuse will inevitably be that the Wehrmacht were not Nazis. Again, this is not true. SS units tasked with extermination missions were attached to Wehrmacht units and thus under the command of Wehrmacht officers. Nowhere is there an example of Wehrmacht units interfering with or failing to support the mission of the SS as they murdered their way across Europe. Additionally, it was the Wehrmacht, not the SS, who were responsible for the care and transit of prisoners of war captured by German forces. Millions of prisoners, particularly Soviet soldiers, starved to death or were shot for failing to march out of the forward operating areas fast enough. These POWs, being Russian, were not as human as the German soldiers were after all. Still don’t believe me? I’ll let someone whose vaunted military prowess earned him the rank of Field Marshall in the Wehrmacht, Walter von Reichenau, speak for himself. “The soldier must have understanding for the necessity of the harsh yet just punishment of the Jewish sub humans… He is called upon to achieve two goals. 1) The extermination of the Bolshevik [he means Russians] heresy… 2) The merciless extermination of foreign treachery and cruelty to safeguard… the German Wehrmacht in Russia.” This is not by any means the worst example of Nazism amongst Wehermacht leadership, it was simply the first one I found. To claim that the snipers use the SS logo as a nod to German military prowess in World War II and not as a symbol of Nazism is false. There was no distinction between them then and there should not be now. This is nothing more than an excuse that leaders will use to conceal their moral cowardice when it came to allowing the use of this flag.

My purpose in writing this post, however, is not to lecture misguided defenders of these actions, (OK, maybe that last one was a little bit) but to point out the sickness that these symptoms portend. First, I have to go back to LtCol Grice’s article about socks and supervision. The Colonel’s article seems to describe a trend of over-supervision in the Marine Corps. Most Marines would undoubtedly agree. Some Marines enjoy enforcing the minutiae of our ever expanding array of regulations, the majority of which are irrelevant to wars past, let alone the current wars. This activity, and presumably the memorization of these esoteric regulations, consumed the majority of their time, as has been mentioned on this blog before.
So, if Marines are spending so much time being supervised and increasing centralization is destroying leaders’ ability to make decisions for their own unit, why do events like this keep happening? There’s only one possible explanation. We don’t know how to supervise anymore.

Every Marine has heard the old trope that supervision is the most important step in BAMCIS, but do we know how to do it? It’s more than just ensuring that tasks get accomplished, regulations are adhered to, and Marines are present for duty. If you, as a leader, are not affecting how those tasks get accomplished, which of those regulations are followed, and how Marines conduct themselves when not present for duty, you’re only doing the bare minimum of what is expected of you. If your only method for affecting your Marines as your subordinates is punishment and paperwork, you’ve yet to learn the meaning of leadership. No matter how long you’ve been in.
LtCol Grice’s post and these tragic events that have come to light lately prove that we no longer know how to supervise, lead, and maintain discipline. We’re supervising the wrong things. Unfortunately, there’s no real way to retrain the Marine Corps to fix our supervision problem. It’s a direct result of our culture. Our culture has brought us to the point where we all bear responsibility for these events. Every one of us. Every NCO who is more concerned with knocking out a checklist than mentoring his young Marines. Every SNCO who spends time searching out uniform regulation infractions. Every officer more concerned with paperwork and formats than setting an example. Every Marine, of any rank, who has told a subordinate to “shut up and color” when he or she pointed out that something was wrong. Our acquiescence to a culture of corrosive leadership has created this problem. We allowed leadership to be conflated with the creation and rote memorization of irrelevant regulations. We stopped mentoring and started poor parenting. We allowed bureaucratization to drown professionalism. We fostered a belief that we are special snowflakes who need rules, but not morality. We hazed Lance Corporal Lew. We desecrated human bodies. We posed in front of Nazi symbology. It's our fault that the Commandant has had to publicly apologize for a problem that our poor leadership caused.

All of these events were a failure of leadership. Every Marine involved knew that what they were doing is wrong, but they did nothing to stop it. This is a problem that a safety standown, more specific regulations, and education about morality and ethics will not fix. We have fostered a culture that takes perverse pleasure in enforcing irrelevant standards while simultaneously ignoring or enabling true misconduct. We’ve fostered a generation of Marines who will look at the picture of the scout snipers and see facial hair, unbloused boots, and hands in pockets before they notice Nazi propaganda. They will quickly condemn failures in appearance but will enable and defend moral failings. They will ignore and allow a Lance Corporal to be hazed and ostracized. They will join in with the desecration of bodies. These are our priorities. But at least the grass around the battalion CP will remain undisturbed by feet clad in identical socks. 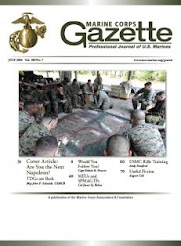